Experiential agency Tinder-Box, created an elegant farewell dinner for some 60 guests to honour the outgoing president of Volvo South Africa. The full technical for this occasion was professionally catered for by MJ Event Gear and included the new Robe 100 Beams.
Held at the Hilton Ballroom on 21 April 2012, Volvo management along with some of their biggest clients gathered to say good-bye to Anders Lindblad, who plans to relocate back to Sweden. The occasion included performances by Fever Trio, the Volvo Star for Life choir (Star for life is a non-profit Swedish school created in South Africa), and a surprise act by Swedish band Tripple & Touch, who have performed with the Star for Life Choir on several occasions – just in from Sweden that night.
The original spec included 12 LED PARcans, Source Fours, MAC 250 Entours and Prolyte Trussing. However, when MJ’s delivery of 24 Robe 100 Beams arrived just prior to the show, Theo Rood, production manager at MJ for this event, ensured that 12 of the fixtures were put on the show.
In house designer, Johnny Scholtz lit the show and utilised the 100 Beams to colour wash the ceiling, assist in house lights and create memorising backlighting effects to the stage. 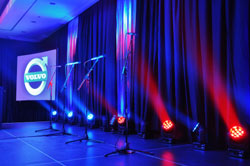