With a carnival atmosphere and some 1 000 guests, the annual Tarsus Dealer Bash 2012 would not disappoint. This lavish party, with full technical supplied by MJ Event Gear, was held at Helderfontein, The Africa Room, on 8 March 2012. The gig used Robe fixtures and Sharpies.
Kevin Perkins portrayed his comedy act of Michael Naicker and Just Ginger added entertainment to the evening.
MJ Event Gear were commissioned by Idealist Event to cater for the technical aspect of the show. For the fourth consecutive year, Johnny Scholtz did the full design. “I used four fingers of truss extending over the stage,” explained Scholtz. An additional circle truss was rigged in the centre of the room, utilised to hang draping to further add to the carnival festive atmosphere and there were also two satellite stages.
“Four Sharpies were flown and an additional two were placed on deck,” said Scholtz. “They were phenomenal. It’s mind blowing the beam it throws, it’s really good. For that type of environment (very rock and roll) the fixtures worked very well.” The MMXs were used to do background and gobo work.
“The Robin 300s used to light the satellite stages was very effective with a narrow zoom to get the intensity needed to light these stages and then a wide enough zoom to create a big general wash around the room. The Robin 600 LEDs were used to create a smooth soft backlight on stage with their exceptional zoom and superb colour mixing. I also like the individual control of the rings. This just added that little bit extra to make the whole design come together beautifully.” 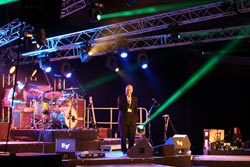