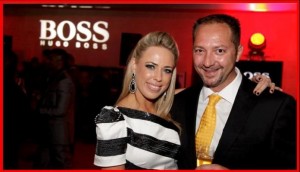 A high profile launch for the new fragrance Hugo Boss Sport, was fittingly hosted at the McLaren dealership in Sandton and attended by South Africa’s most popular celebrities. Robin 300s and 600s added colour and branding. A highlight, without a doubt, was one of Lewis Hamilton’s Formula 1 cars used during 2007 – the same year he won the World Championship – as well as a replica racing car simulator.

MJ Event Gear were commissioned by Crimsonroom Communications to provided the full technical including lighting, screens and sound. The spec was summed up in one word, “Red” – for the inside and the outside. The event was hosted by radio and sport presenter, Sasha Martinengo, and Kerry Ellis – Hugo Boss SA Brand Manager. The entertainment mix included DJ Fresh and DJ Bravo.

Kerry Ellis, Hugo Boss SA Brand Manager, and radio and sport presenter, Sasha Martinengo. Theo Rood from MJ Event Gear explained that 12 Thomas Pixel Pars were used to light up the exterior and the McLaren showroom entrance. He says the fixtures worked effectively and the venue was adorned in a striking and welcoming red glow.

“The venue was aesthetically challenging,” commented Otto de Kock, MJ’s Project Manager and Sound Engineer. Being a showroom, it was very bright with tiled floors and a great deal of glass and windows but other than that, the event was simple enough and ran without a glitch.

Six Prolyte X30V totem trusses were positioned in the showroom and each supported a Robin 600 LED Wash on top and a plasma screen cleverly positioned underneath. The screen ran with video footage, including the glam Hugo Boss Sport advert and logos. Each totem was up lit in red making the structures more of an eye catching feature. One of the totems and screens was used for the pulse-racing car simulator which was thoroughly enjoyed by the guests – boys will be boys!

“The Robin 600 LED Wash is potent,” commented Francois van der Merwe, Lighting Designer. “We used them to colour the entire room because everything had to be red. A couple of the fixtures doubled up to light the stage area and the zoom on the 600 is amazing. It’s a good product and I’m starting to use them as house lights. Just the weight and power consumptions is great, the ease, power, distribution, lamps… all this in one package.”  MJ Event Gear supplied “Boss” gobos for the launch which were projected around the venue via four Robin 300 E Spots.“It was a really successful event and everyone was very, very happy,” commented Pauline Parker from Crimsonroom, “Please thank the entire MJ team, they were great.”